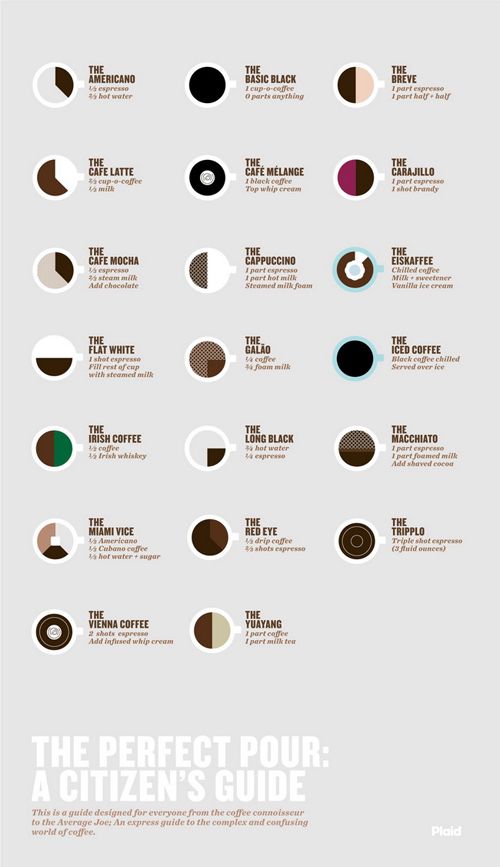 Posted by Stacey Lynn at 6:05 AM No comments: 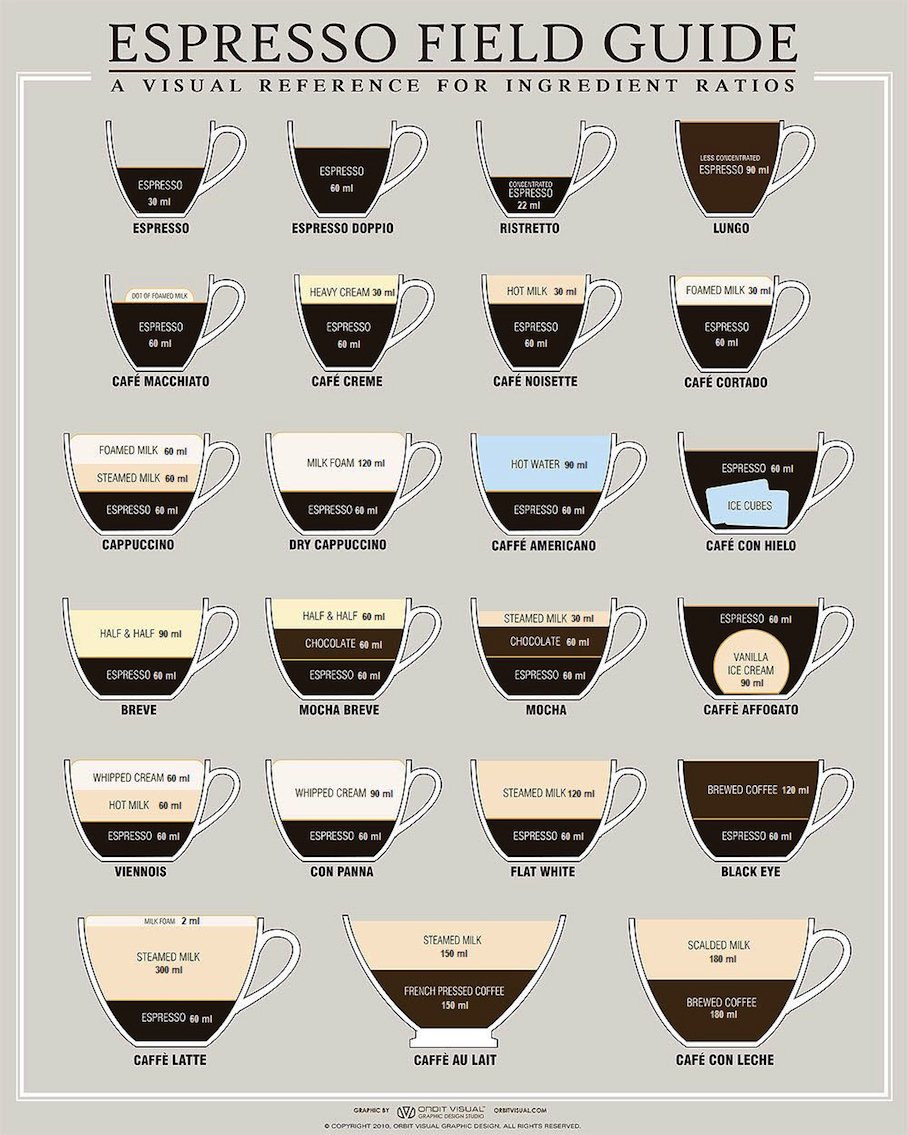 Now you know what's what in the world of espresso drinks.

Posted by Stacey Lynn at 6:01 AM No comments:

Today I'm making pinto beans.  I put a lot of them on - 2lbs of dry - so I can set some back for lunches during the week. 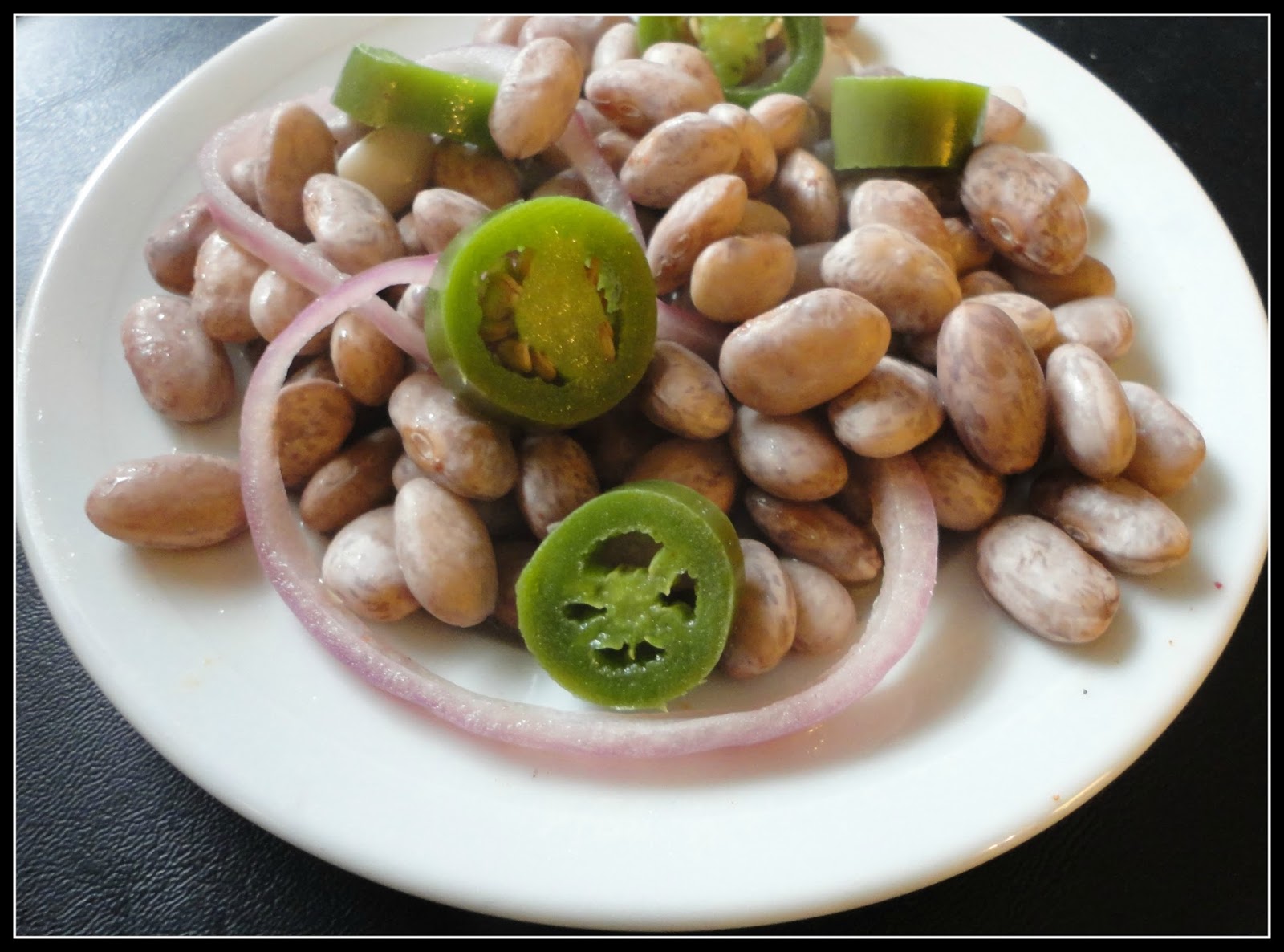 2lbs of dry pinto beans ,soaked and rinsed.
1 large red onion, sliced,  I like the onion left in rings so that picky people can fish it out.  Diced would work too.
8 fresh jalapeno peppers, sliced
2 teaspoons crushed red pepper
1 teaspoon salt
1 teaspoon ground black pepper
1 teaspoon ground ancho pepper (I love this stuff and go through a ton of it)
4 tablespoons butter
3 cloves garlic

Put all of the ingredients into a large pot, add water until it's about 1/2 inch above the level of the beans, less if you have a really wide pot

Cover and cook at a low simmer until tender - about 1 1/2 hours.  My pot isn't totally flat on the bottom anymore, so I stir occasionally to make sure they don't stick and burn in the dents.  (totally need a new pot)  With other pots you won't have to stir very often at all.

When the beans are tender, fish out the garlic and serve.

This one got an A.  Not surprising.  The only real "bad" things are added salt and the butter.

based an 1/4 cup serving 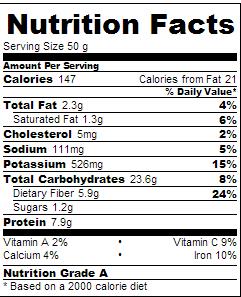 Posted by Stacey Lynn at 6:08 AM No comments: 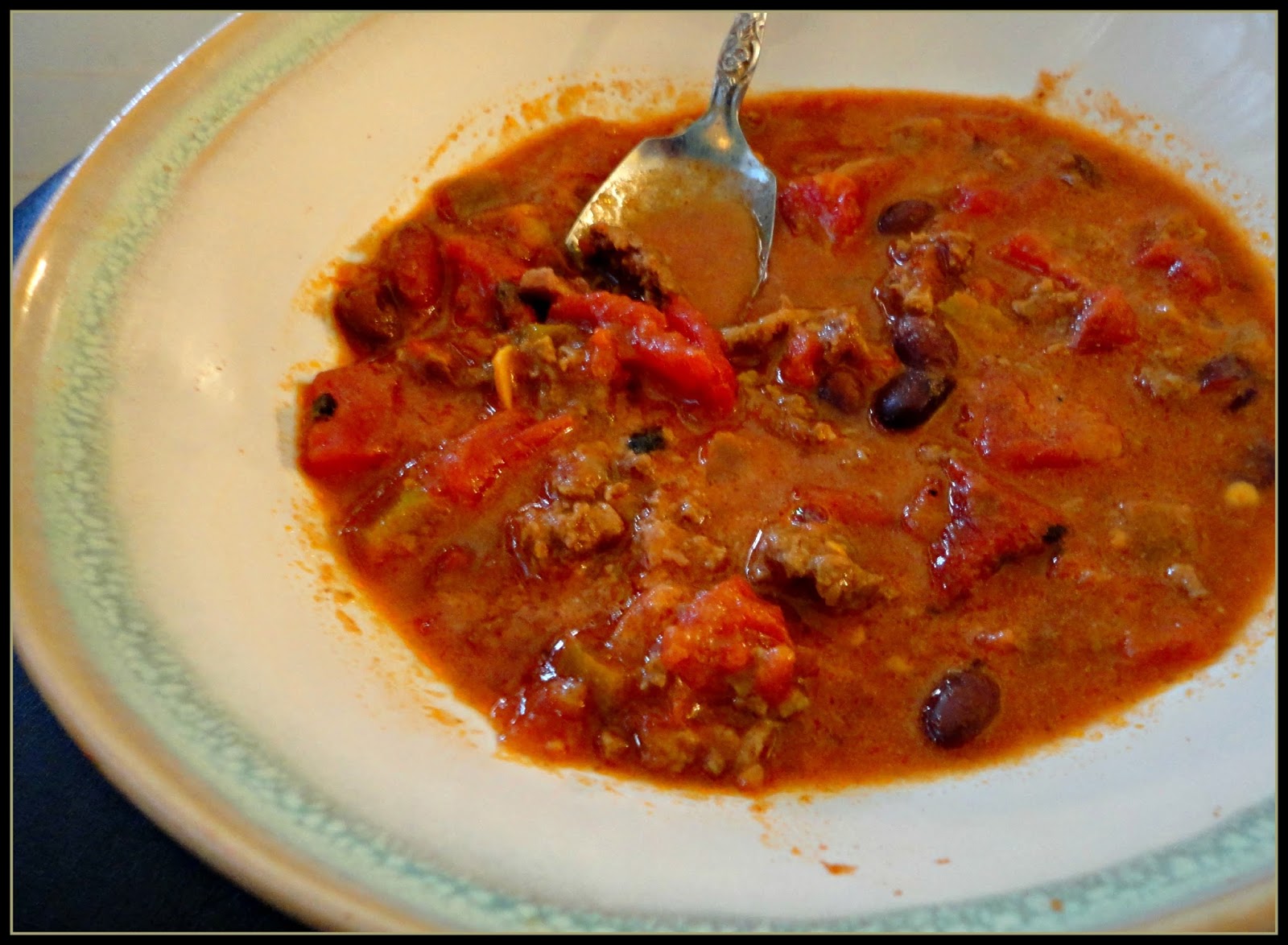 I make this chili on Saturday or Sunday and we have leftovers all week long.  It's great for taking in lunches.  This recipe makes a LOT and I've never tried to cut the recipe down.  I just put the leftover in jars in the fridge and we eat it over the next week or so.  It heats up great.  I use lemon and lime juice because I like a lot of citrus in my chili.  The peppers are seasonal, but usually spicy.  If you prefer mild chili, just use mild peppers.

3lbs ground meat.  I usually use 80-20 ground beef, but I've used a lot of others as well.  Never tried this one with chicken though.

Basically you want a lot of beans.  Those are the ones I usually use, but sometimes it depends on what is on sale.  Don't use dry beans that have not been soaked.  I said FROM dried, not STILL dried.  I guess you could use them if you add a lot more water and are cooking it over a long time period.  I've never tried it though.

Veggies
1 large onion diced
2 lemons - sliced.  They will be cooked in the chili but removed before serving
An assortment of fresh seasonal spicy peppers.  I use about 15 peppers.  Jalapenos, poblano, chilis and some thai peppers I picked up at the market.  The amount and variety really depends on what the market has
1 red bell pepper
1 yellow  bell pepper, diced
2 green bell pepper, diced
3 cloves garlic

2 large jars of your favorite corn/bean salsa or make salsa from scratch and add that if you have the time.
3 tablespoons butter
4 tablespoons lemon juice
4 tablespoons lime juice
4 cups water

heavy whipping cream - you'll use this when serving, 1 teaspoon per bowl

really big skillet
very big pot.  I use an 18 quart stock pot with a lid

melt the butter and saute the spicy peppers and garlic.  I cut the garlic up into little bits, but leave the peppers in large pieces because not everyone in my family likes them and that way they can pull them out and leave them for me.  :-)

When the peppers are cooked remove them from the heat and put them in the pot.  Next toss the meat in the skillet with the chili spice ingredients and brown it.  I like to drain some of the fat from it.  3lbs is a lot of meat, so you might want to divide everything up into two batches if your pan isn't big enough.

Dump everything else into the big pot.  Add the meat and peppers cooked earlier. Stir it all together and cook.  I bring it to a boil and then turn it down and let it simmer un-covered for about an hour or longer, until it has reached the thickness I want, then I keep it covered and just enough heat to keep it warm.  Stir occasionally to keep it from settling and keep the flavors mixing well.

When you're ready to serve, remove the lemon pieces - honestly I do this as I'm serving.  I don't have the time to hunt around in there for them.

In each bowl add a teaspoon of heavy whipping cream.  I used to use sour cream and it does work wonderfully, but one day I was out and tried this.  I liked the addition, so it's my new way.  My kid still tops it with sour cream and cheese.

Some days I substitute other salsas for the corn/bean one, but I really do prefer it. 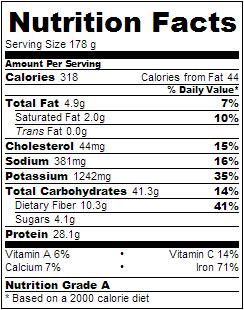 Posted by Stacey Lynn at 1:36 PM No comments:

Posted by Stacey Lynn at 1:06 PM No comments:

Again from our road trip to Arizona.  I think I saw this guy along Route 66

I love fresh homemade caramels.  Such a treat.  these are made with just a touch of pumpkin pie spice. 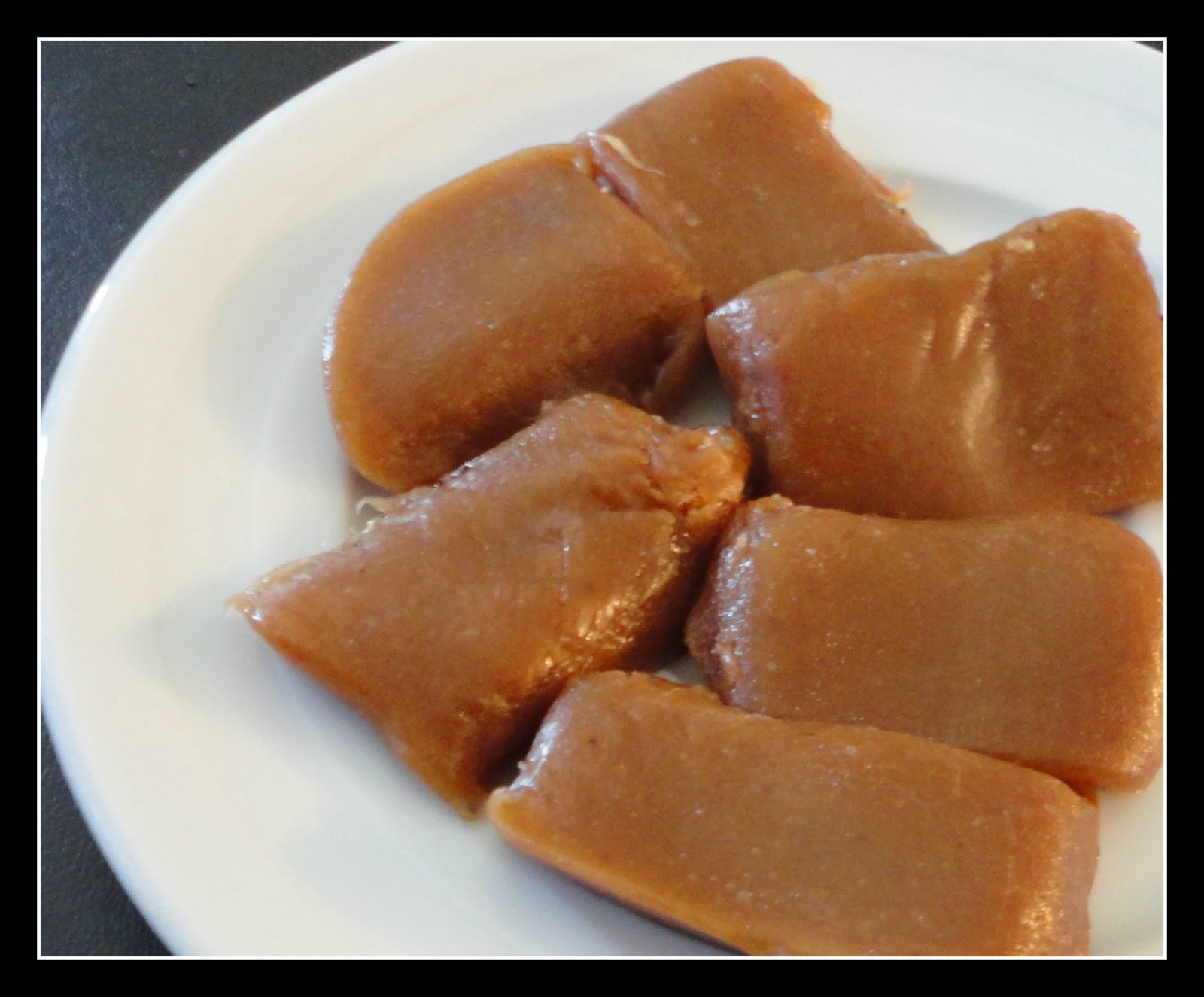 Butter a large pan - 13x9 or so.  Set this aside for later.  Skipping the buttering step is a mistake.  Caramel sticks and is a nightmare to clean.

In a heavy pan - large 4quarts, combine everything except the vanilla.  Over medium heat, cook, swirling it around or stirring occasionally to keep it from burning.  until it boils - 10 - 15  min the cook for another 20-30 min or so again swirling it around to keep it from burning until it reaches the firm ball stage (when you drop a small amount into ice water and it forms a firm ball). I don't have a candy thermometer, so I don't know what the exact temp should be.  I have seen recipes that say between 240 and 250.

Make sure you have a large enough pan.  The sugar and cream expand a LOT and it becomes a bubbly, sputtering cauldron of molten yummy that will burn the heck out of your skin if you get splattered.

Remove from heat and then stir in the vanilla.  Pour into that pan you readied in step 1.

cool
then cool some more

until it's COMPLETELY cool.

Cut into 1inch x 2inches pieces and wrap in plastic food wrap or wax paper.  I sometimes use butter on my hands when I am wrapping individual pieces because I get tired of having sticky  hands.

This one gets an actual F on the good for you grading scale.  Then again, how could it not?  Each tiny (1x2) piece has almost 100 calories.  It's good for a treat, but only an occasional one! 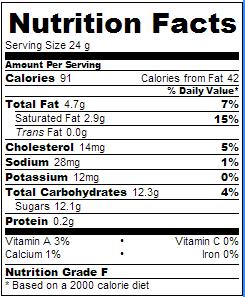 Posted by Stacey Lynn at 4:10 PM No comments:

From our road trip to Arizona last year.

Arizona1
Posted by Stacey Lynn at 12:08 PM No comments: 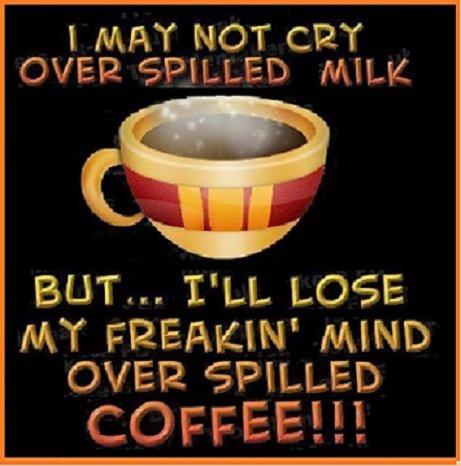 Yeah,  I could have shortened the title, but why not make it a mouthful.  :-) 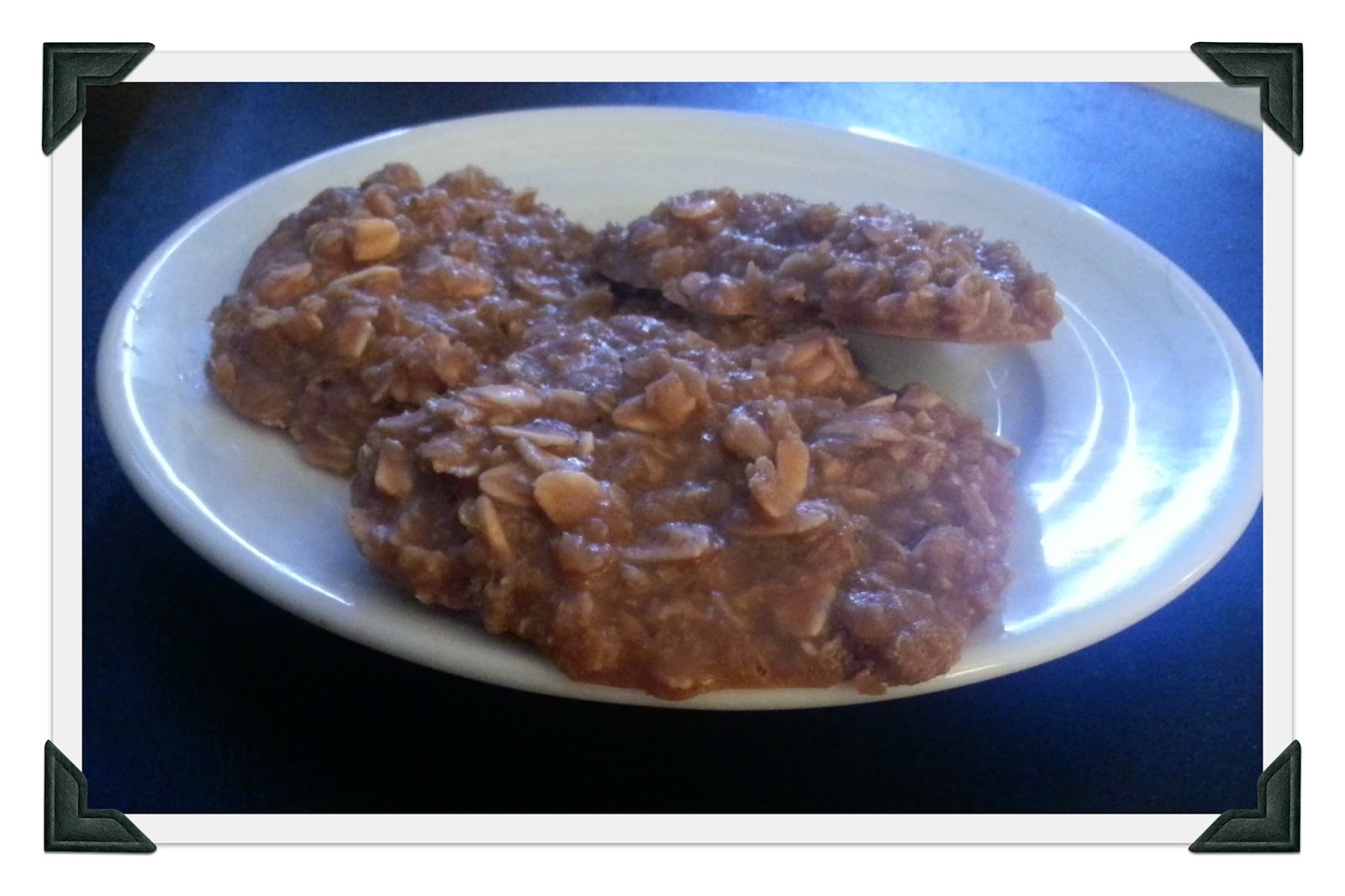 In a large, heavy sauce pan bring all the ingredients EXCEPT the peanut butter, coconut and oatmeal to a boil.  Stay with it and stir or the sugar might burn.  It goes from fine to burnt faster than you might imagine.

add the other ingredients and mix well.

Drop rounded teaspoonfuls onto the wax paper and let cool until hardened.


Because this can be a melty cookie, I freeze a couple if I am going to send them in lunches.  That way they won't get overly soft from the heat of the locker.

The kid really likes them, but how could she not.  It's more like candy than cookie since there is so much sugar!

not worried about gluten?  Use regular rolled oats and any hot chocolate you want.

I used an online tool to analyze the recipe.  One serving is 1 large or two small cookies.  I'm actually surprised it got a D.  I was expecting an F.  They're tasty, but NOT good for you. 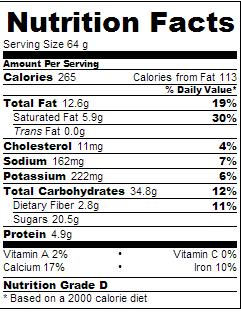 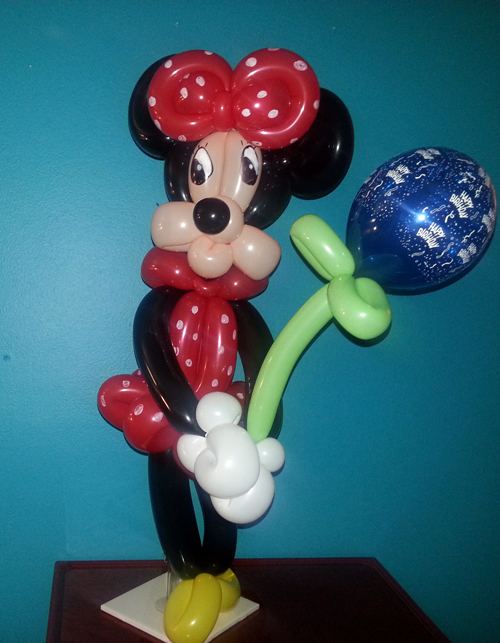 Click the small Minnie to go to the puzzle.

Minnie
Posted by Stacey Lynn at 10:16 AM No comments: 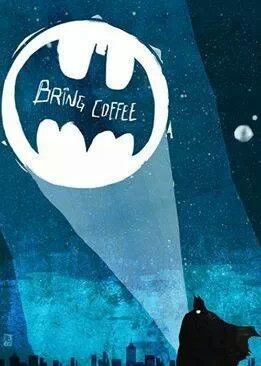 Posted by Stacey Lynn at 6:03 AM No comments:

Posted by Stacey Lynn at 1:18 PM No comments:

A lily pad from my pond at our old house.  I know it's not traditional to have decorative ponds in the front yard, but I loved walking out the door and seeing the frogs and flowers. 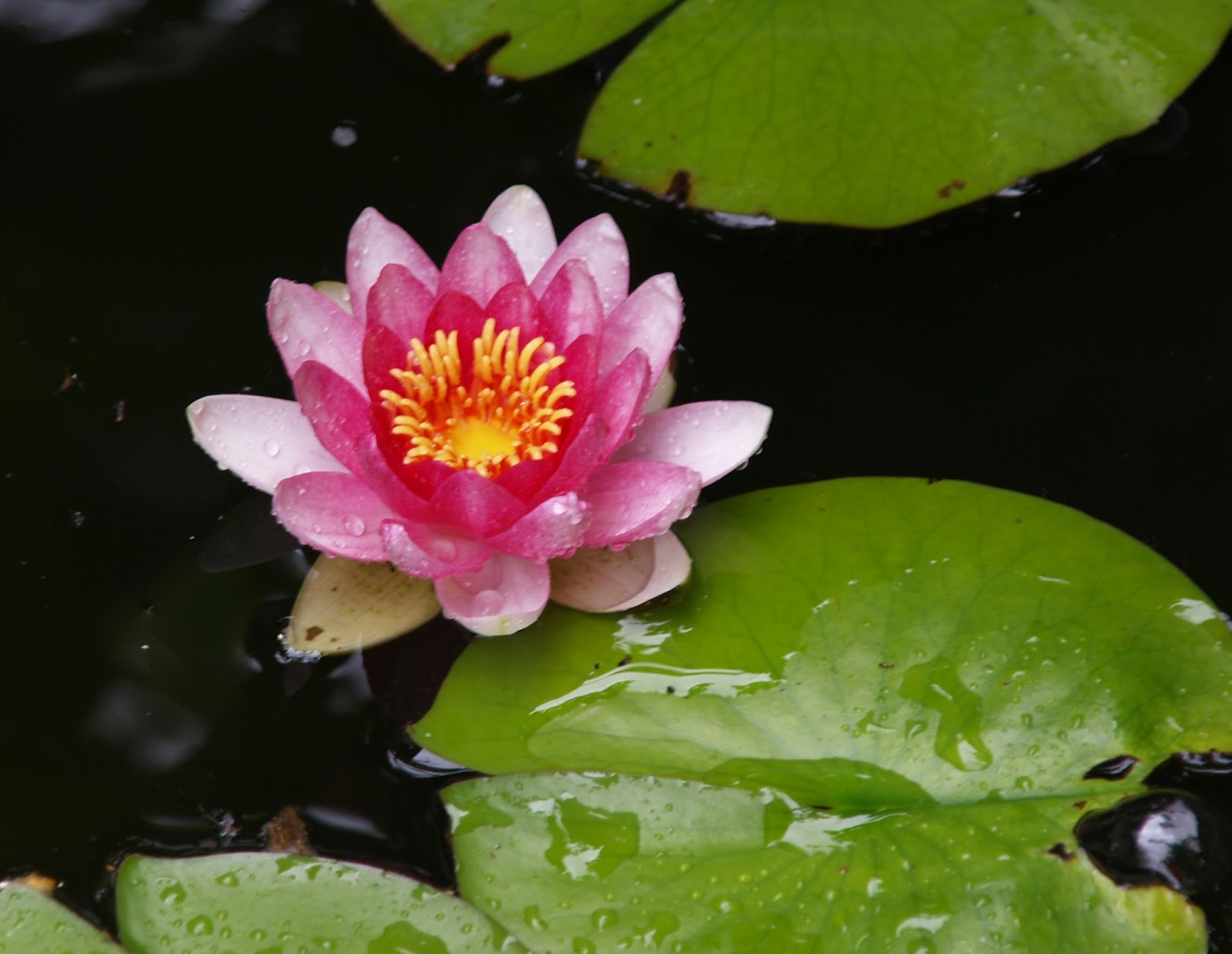 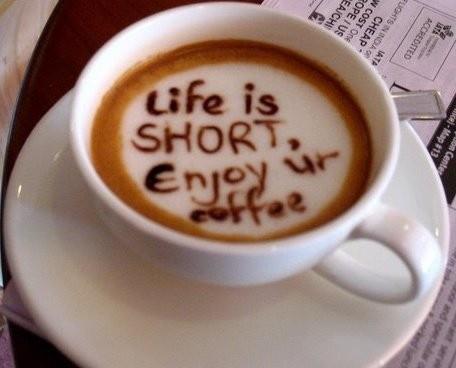 Posted by Stacey Lynn at 6:09 AM No comments:

Balloon Alpaca.  This one eventually went home to live with a friend who raises Llamas. 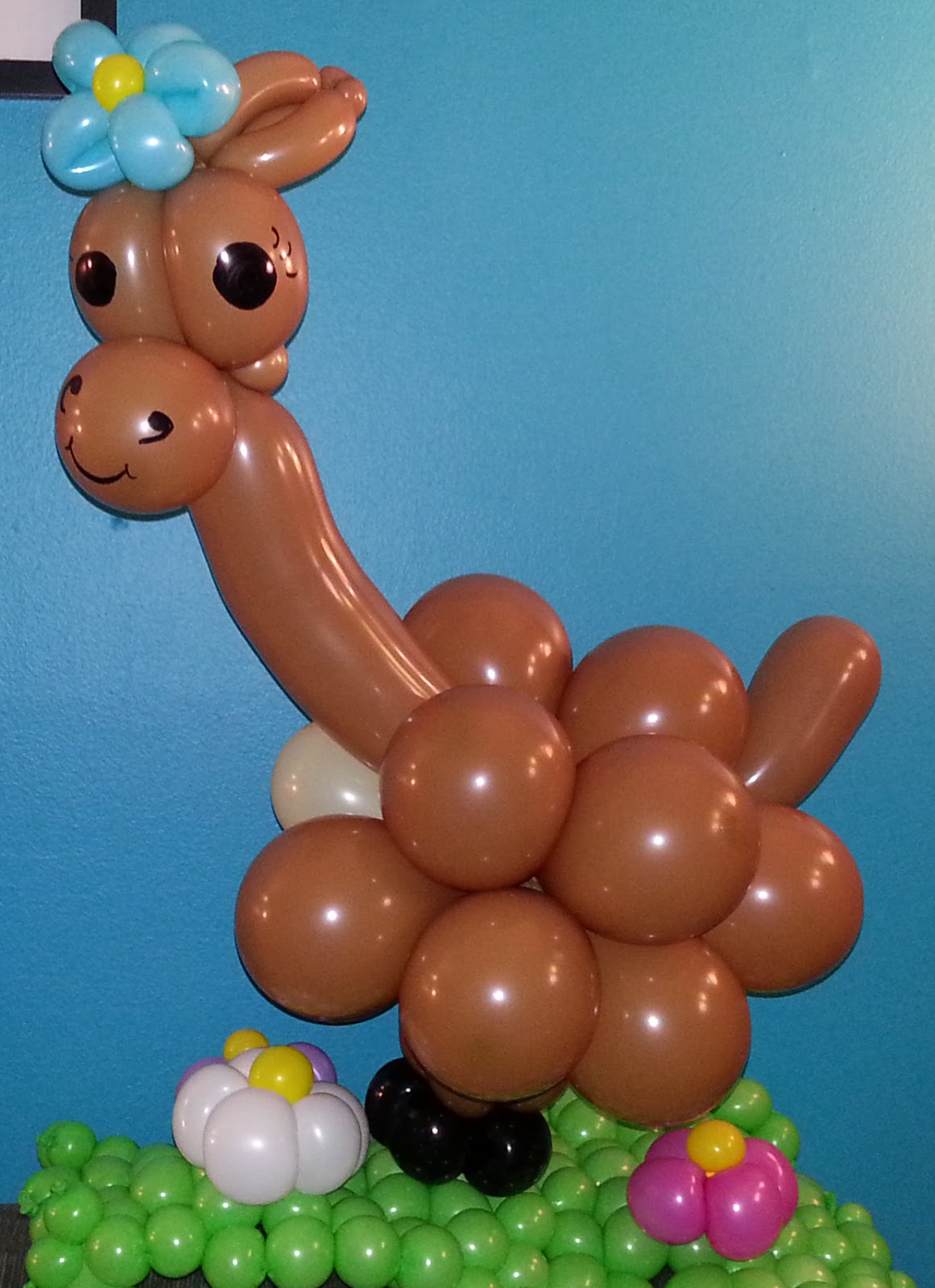 One of my favorite balloon sculptures

Frog on a lily pad eating a fly 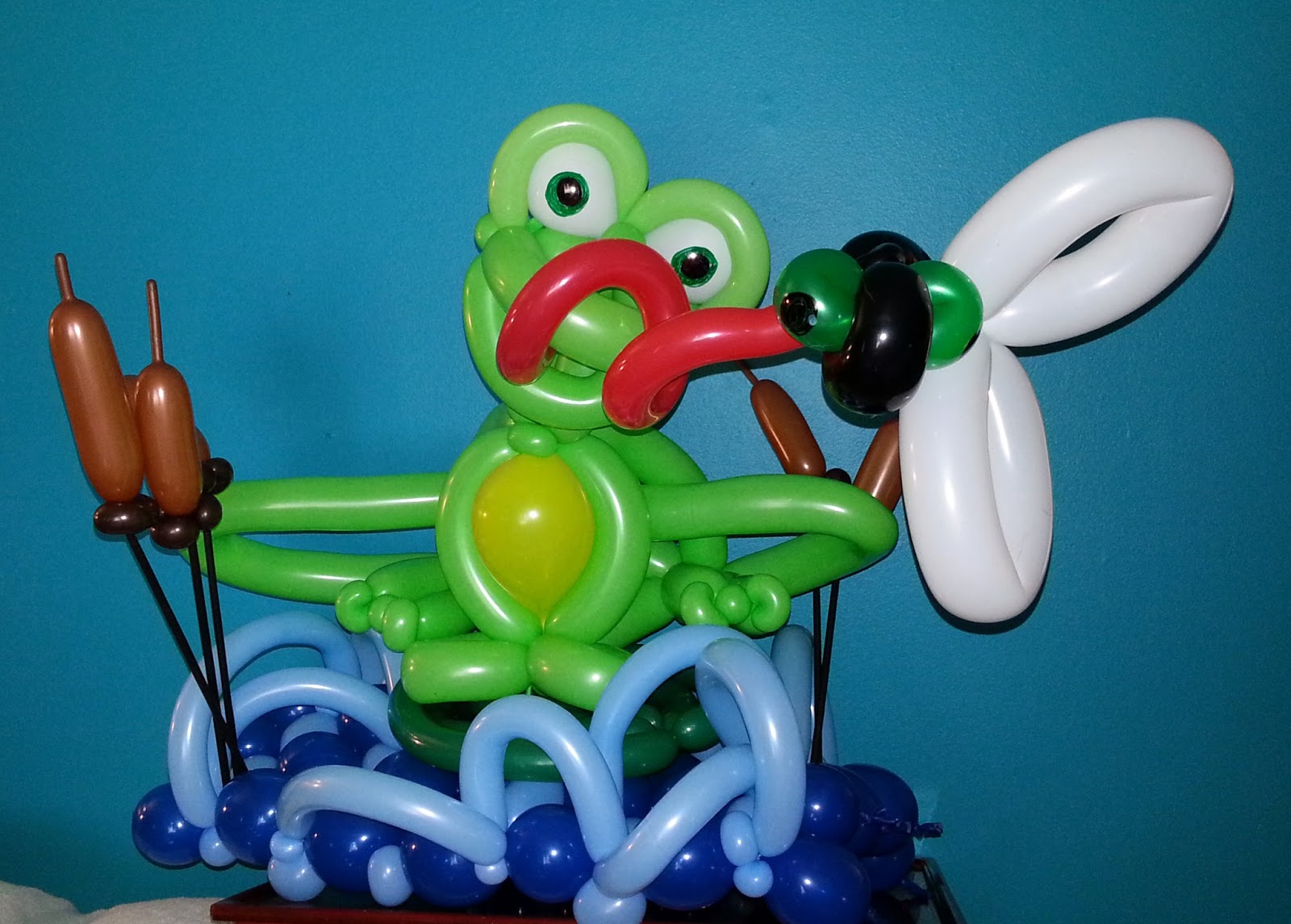 Windchimes
Posted by Stacey Lynn at 11:11 AM No comments:

Such a smart idea! 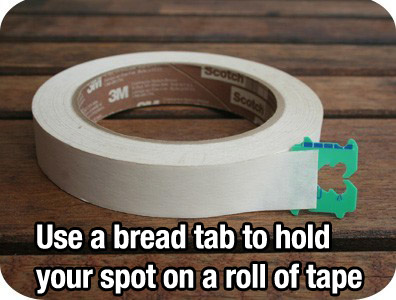 I have spent way too many hours looking for the end on tape.  Not so much masking tape, but it should work as well on packing tape and duct tape.  Problem is we don't eat bread around here (wheat allergy) so I'l have to ask a friend to save some for me.

Moral dilemma - do I share the idea and brighten her life too or do I just get the tabs and leave her in the dark.  LOL

Posted by Stacey Lynn at 4:36 AM No comments: 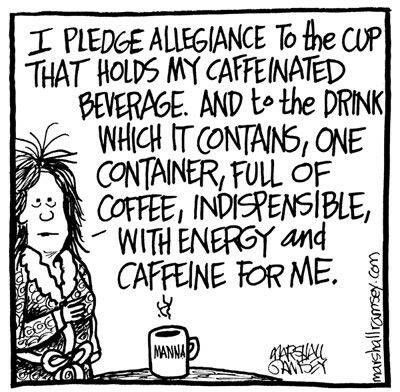 Posted by Stacey Lynn at 4:32 AM No comments:

Time for that Morning Cup 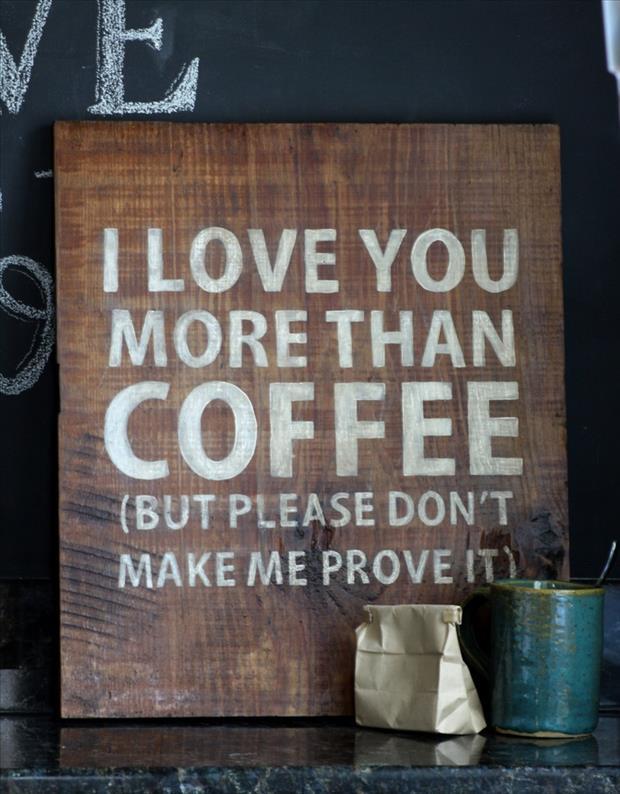 Posted by Stacey Lynn at 5:54 AM No comments:

Funny from the Web 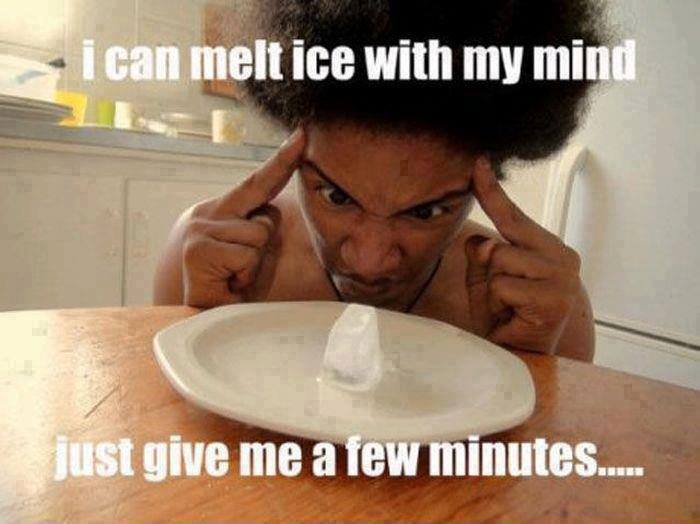 This always makes me laugh, even though I have seen it dozens of times.  Melting ice is one of my superpowers too!  I can also make it dark outside if I concentrate long enough.

Posted by Stacey Lynn at 5:53 AM No comments:

Oranges from the City Market. I love market. We've done balloons there for years and I've gotten to know many of the vendors.

Oranges at the city market
Posted by Stacey Lynn at 1:11 AM 1 comment: