I lucked into a bunch of old cookbooks at the thrift shop.  I love the ones put together by churches and women's groups - they often have the most usable and most interesting recipes.   Not to mention the most character.

I started with the oldest one.  Officially, oldest that is.  One of them has no cover or identifying information, but based on other things I think it was very put together in the very early 70s.  So unless I find out otherwise, Daily fare - Party Flair is the oldest one and that's where I will start. 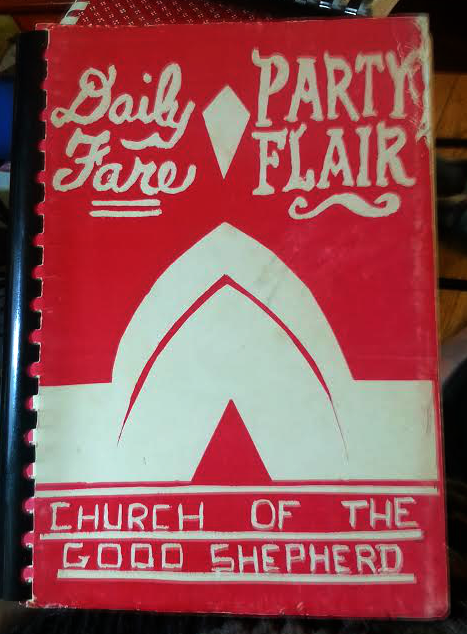 It was compiled by The Kitchen Committee at the Church of The Good Shepard and only sold for $2.50 with a whopping 25cent mailing fee.  It was made in a time before the phone numbers switched to the 7 number format we are familiar with today.  That happened by the late 60s in most of the US.  The artist really made this book for me.  Some of the recipes are interesting and I'll try a few, but she really added a character that makes it one of a kind. 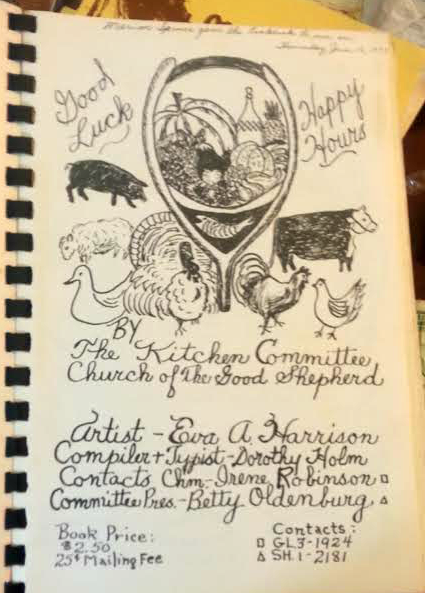 The church is still around and you can find their website at
http://episcopalcogs.com/

I'm not sure why U.S> Senate Bean Soup is called that.  Maybe because of the pork.  :-)  However the naming came about - the senator giving the speech seems very serious about it. 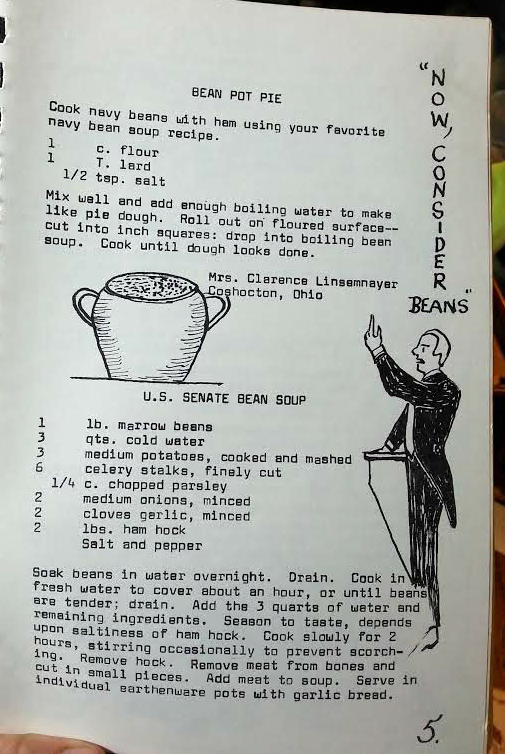 This is one I am going to try if I can find some marrow beans.  I guess I could substitute, but I think I will at least look for them first.

Here's another I am going to try - probably tomorrow.  I'll post a picture.  I love how the pineapple is just shaking in anticipation. 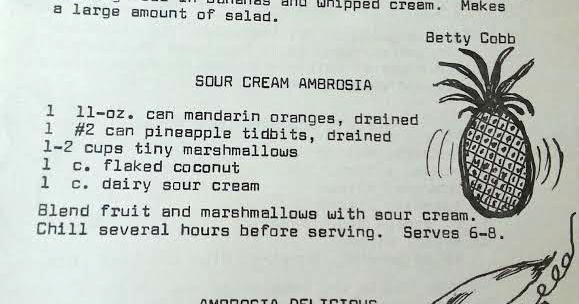 This one is apparently a collaborative effort.  I'm not sure who wrote the "Very Good".  Might have been the artist or the perhaps the compiler.  Her beautiful flowing penmanship appears in several places throughout the book with notes and comments on recipes.  Also interesting is that one of the authors is Mrs. Ruth Woody.  More often in cook books of this era the names would be written "Mrs. Husband's first and last name.  By the mid 70s that was no longer the norm with women using their own first name after Mrs.  By the 80s it seems more common for women to just write their name without the Miss or Mrs. salutation. 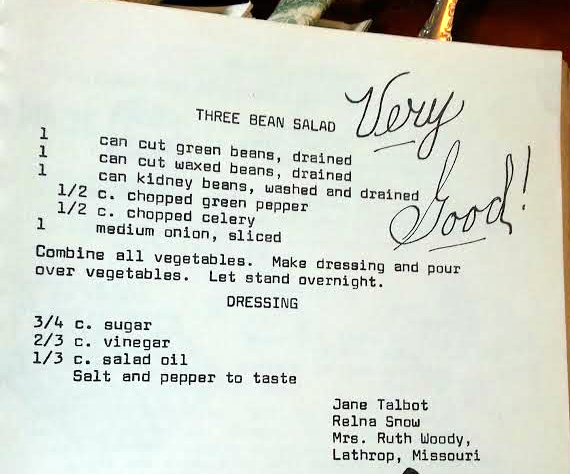 The potato is not so thrilled with being in a small portion of potato salad - but make enough for 25 and he's all into it! 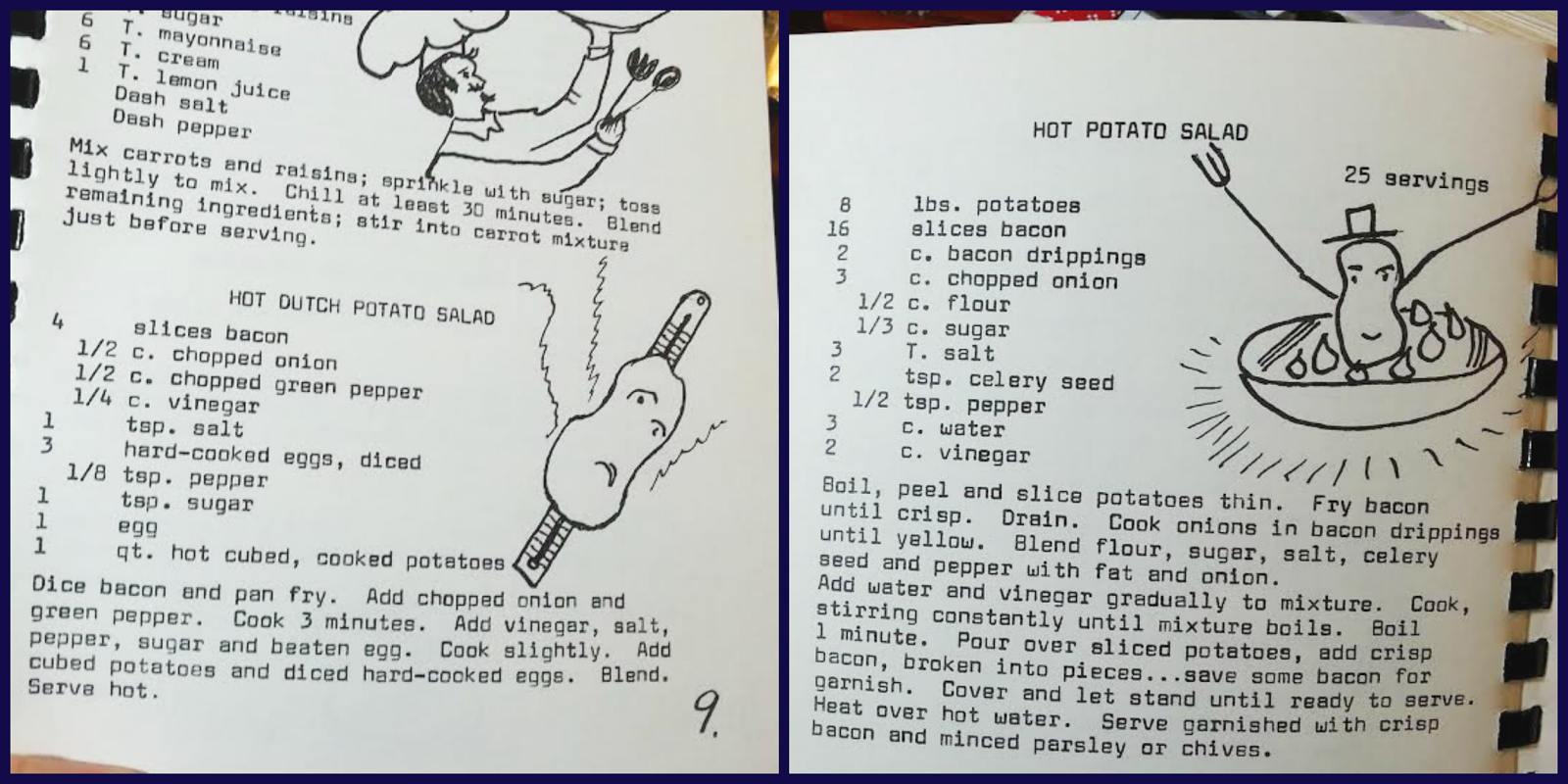 The fact that this book is from a totally different era is highlighted by some of the drawings.  Racists drawings that were totally acceptable in the day and nobody would have batted an eye.   These are not things you would ever see in modern cookbooks and that's not such a bad thing.  As publicly accepted  racism starts to fade we can hope that the private but unspoken racism follows. 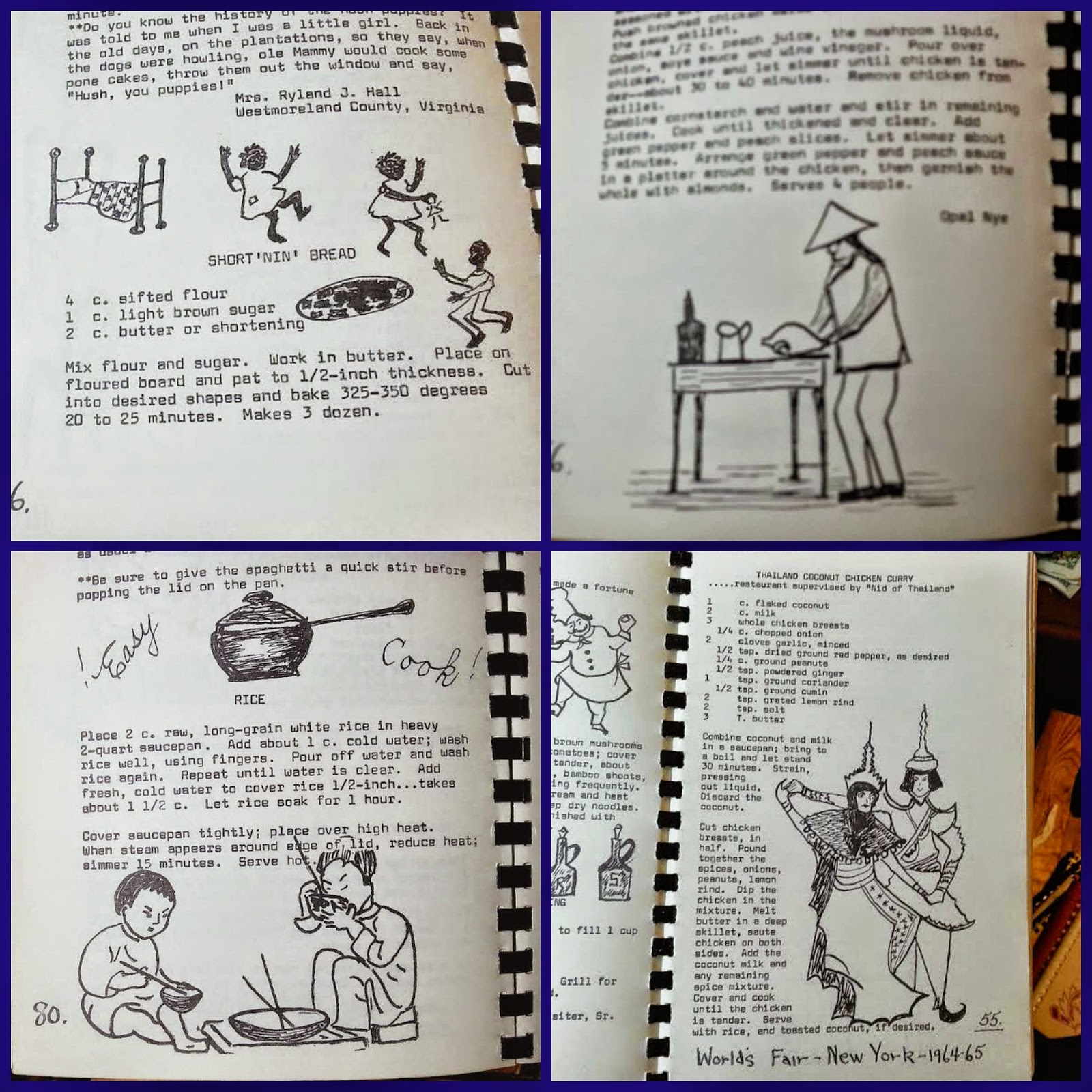 I'm just including this coffee grinder because I have one like it. The coffee was by a waffle recipe and not an ingredient in anything on the page.  I like to think that Eva just liked coffee. 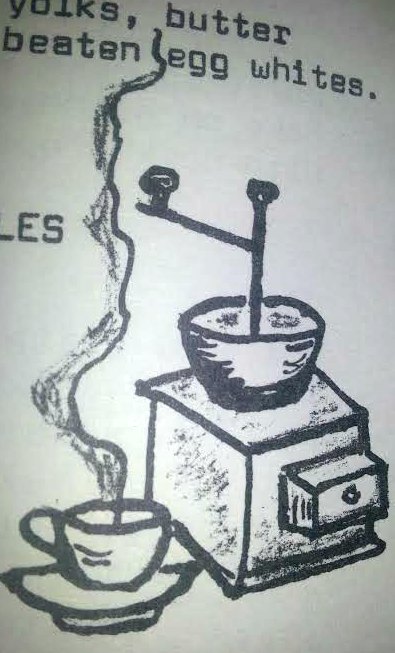 Today is International Pancake Day so I was happy to stumble across this recipe for Liberal Pancakes. 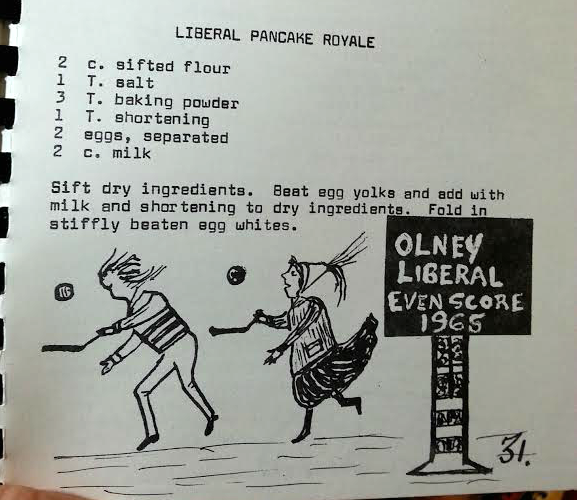 Liberal, KS is home to the pancake race and the people in this illustration are indeed running with pancakes.  They still hold the race and people still run with pancakes. 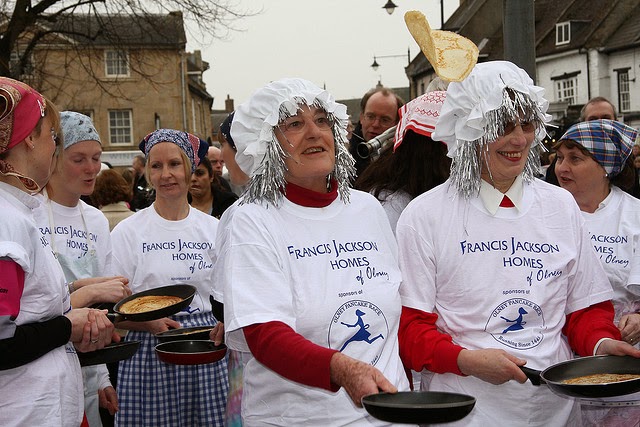 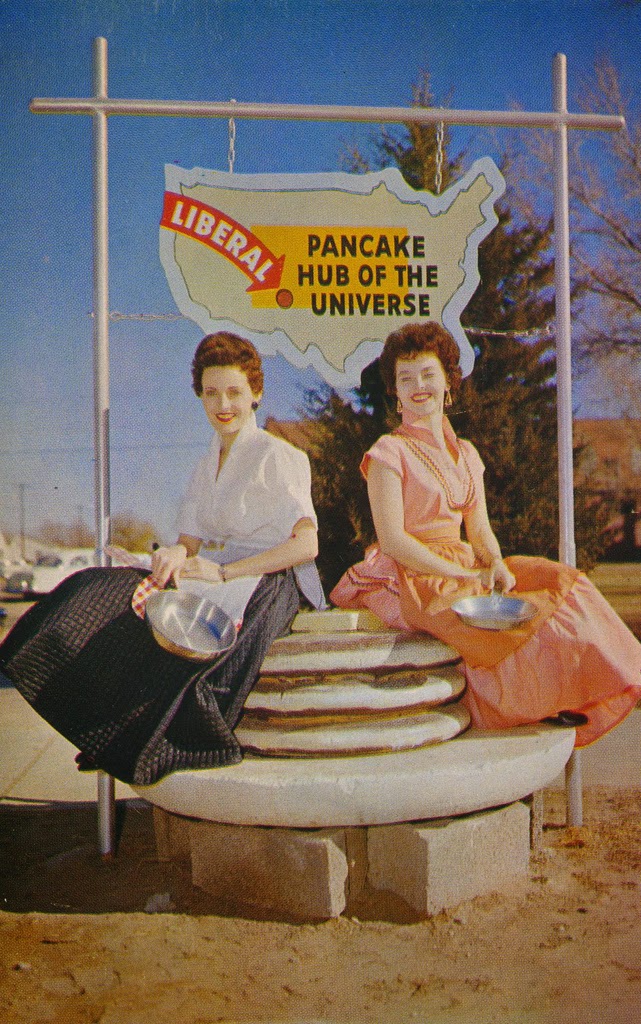 I've driven through Liberal, KS on International Pancake Day while on Pancake Ave.  :-)  Of course I was on my way to CA and warmer temps so I didn't stop -but it was tempting.

I want to make this one just because of the cow. 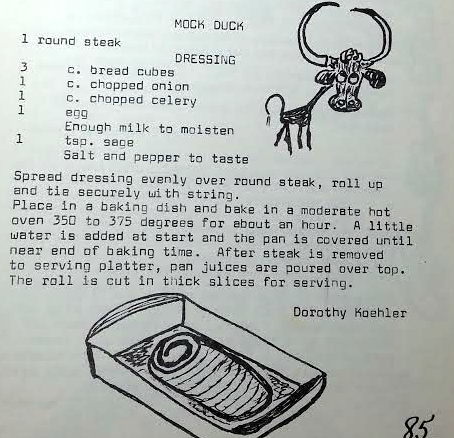 The chicken seems shocked at having to provide 2 eggs. 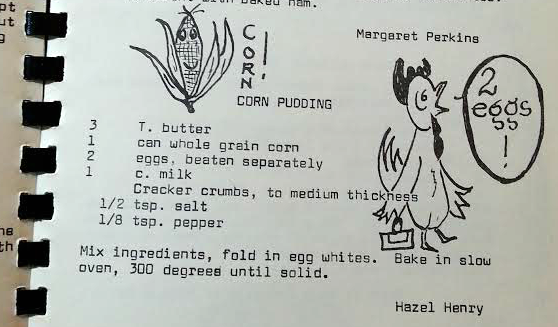 And it seems that this spread is a huge hit.  Got a standing ovation on a chair! 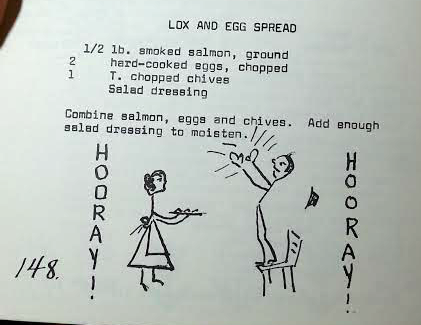 Don't drink?  There are glamorous special drinks just for you. 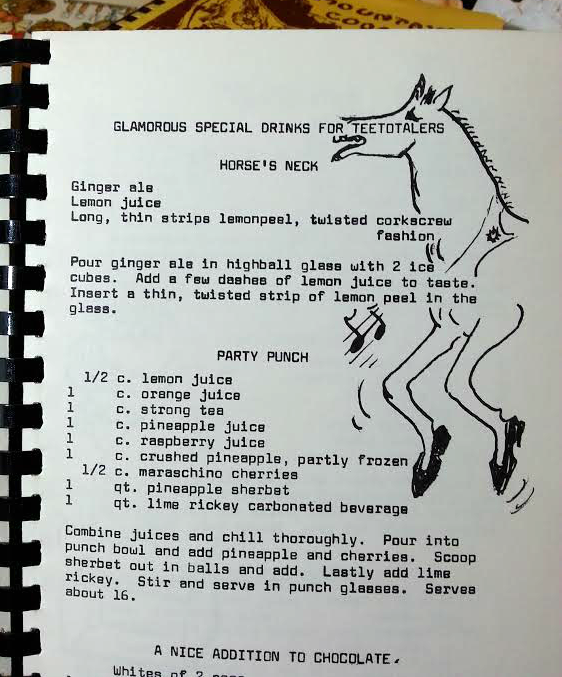 The last section isn't just food.  There are a few craft ideas and some cleaning recipes. 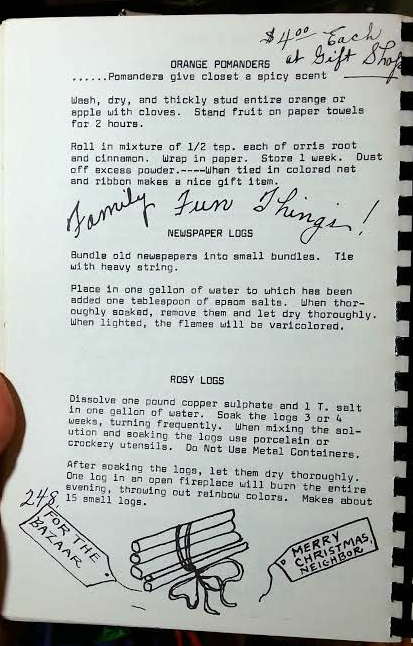 There is even a helpful note that you will pay $4 for Orange Pomanders at the gift shop.  That was a pretty price item in 1965 $$

I was familiar with the paste, though to be honest I have not thought about it in years. 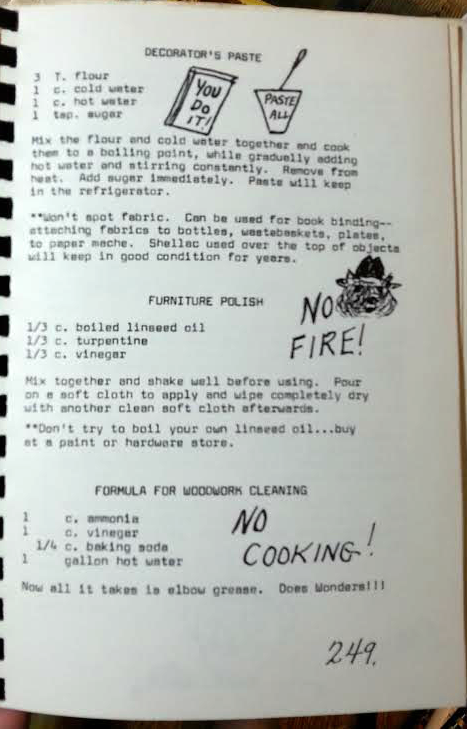 So that's book 1.  I'll post pictures of anything I make from it.  It was a blast to go through and had the most personality of any of the cookbooks I acquired yesterday.