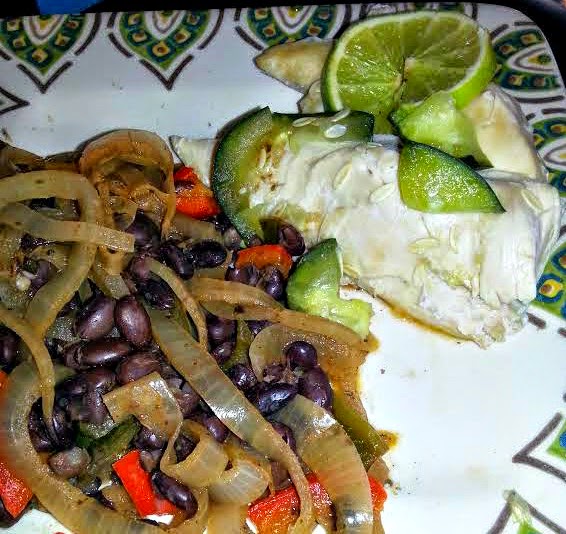 I found some chicken tenders on sale.  Snapped up a couple of packages.  Today I used the first one for our lunch.

One of my cucumbers from the weekend was a bit soft.  Not super crisp for a salad but not bad either.  I decided to see what happens when you bake chicken with cucumber.  It was tasty.  And easy.  I'm a huge fan of easy.

Black beans are a mainstay of our diet.  I did these with some onions, peppers, lime, cilantro, ancho & coconut.  Adding the lime to the beans inspired me to put it on the chicken too.  It was one of those inspirations that worked well.  (unlike a LOT of the others)

Put chicken tenders (however many you want to cook) in a baking dish
sprinkle with salt.  Not much, just a bit
chop a large cucumber up and put it over the chicken.

Bake covered until the chicken is done. How long depends on how much you cook.   Mine took about 20 min.  The cucumber loses a lot of water and keeps the chicken moist and tender.

Remove from oven and squeeze the juice from 1/2 - 1 lime (depends on how much you cooked) over the chicken right before serving.  I added lime garnishes for people to add a bit more lime at the table if they wanted.

Soak and drain the beans preserving 2 cups of the water if you want, otherwise you'll need a couple of cups of water

Add the stock, water, peppers, onions, lime juice and spices to the beans.  Cook until the beans and veggies are tender and soft.  Stir in the coconut cream and serve.